Warning! Today's post is reactionary and illogical. It is fear-based, and will prompt some of my readers to wonder how I can often be rational in my behavior and yet still feed this lurking fear that has been running around in my head for the last week...

[The Bad Beginning: "If you are interested in stories with happy endings, you would be better off reading some other book. In this book, not only is there no happy ending, there is no happy beginning and very few happy things in the middle." --Lemony Snicket]

“Doublethink means the power of holding two contradictory beliefs in one's mind simultaneously, and accepting both of them.” --George Orwell: It's my warning again. My post today is only about questions, not answers. It is not a happy post. It is a self-indulgent "letting" of the bad humours that have been festering in me for seven days now. I have been reading the news this last week the way I usually check Facebook or the weather app on my phone. I keep button mashing on my custom feed of the NYT and WSJ. [I cannot stomach looking at Fox despite knowing it is the most watched single news source out there. I prefer NPR, even though I know those who voted for Trump did not use that as their primary source at all.] I avoid the Washington Post and CNN as much as possible, worried that they are only feeding me what our President has called fake news and alternative facts. But I am reading news like I watched TV after 9/11. How's that for reactionary for you?...

A context of literacy: I have a liberal arts education. That means in some part I have been exposed to (and was expected to read) lots of different kinds of literature with the hopes and intention of expanding my perspectives. I confess I struggled with Thomas Hardy's Return of the Native and never finished it, nor did I ever even try the great American novel Moby Dick after hating Billy Budd. I may have used Spark's Notes on most of my Shakespeare, although I loved his work each and every time I struggled through it. But freshman year was different. I devoured everything we were assigned...

"For if leisure and security were enjoyed by all alike, the great mass of human beings who are normally stupefied by poverty would become literate and would learn to think for themselves; and when once they had done this, they would sooner or later realize that the privileged minority had no function, and they would sweep it away. In the long run, a hierarchical society was only possible on a basis of poverty and ignorance.” --George Orwell

A musical setting of the mood: In 1986 Depeche Mode released Black Celebration. It was the soundtrack for my summer reading that focused on dystopian literature. I read 1984, Animal Farm, Fahrenheit 451, and more... all while I consumed glorious volumes of Jimmy Dean breakfast sausages and quart cartons of Whoppers malt balls. It was a confusingly wonderfully melancholic summer to say the least. I was exploring my own freedoms, regularly walking to a nearby shopping plaza called the Rotunda to buy my snacks, smoke cigarettes, and think about a world larger than my own back yard. And I read...

Depeche Mode's album provided an unintentional backdrop of darkness different from the loud driving sounds of my usual punk/hardcore fare at that point. Depeche Mode was softer, and allowed me to tune it out while I read. It was also the time I watched Ridley Scott's Blade Runner which coincided with my adolescent worries that the whole world was out of control and headed for a cyberpunk era of government controls and hacker rebellion...

It was a time that my father and I often argued about my distain for "the man" and belief in conspiracy contrasted by his rational positively focused perspectives about the world around us. I was trying on my own way of thinking and probably needed to press back against his confidence and clear thought. It's a psychological thing...

And so I was in a self-inflicted adolescent macabre (can I use an adjective as a noun?... well, I just did!) Here are a few lyrics from the first two tracks of Depeche Mode's work to help establish the scene of my reading of Orwell's and Bradbury's work back in the mid 80's:

"We know that no one ever seizes power with the intention of relinquishing it. Power is not a means; it is an end.": So Orwell's 1984 made it back to the bestseller list this past week. I can hear the cries of my more rational and conservative friends asking me what I mean by all this; I can hear the arguments getting built in their heads, and I confess I am making them myself as I look closely at this fear that is lurking in the back on my brain, running around like a maniacal monkey who wants to  angrily throw his shit at my reason and logic. I do not have a good answer. I worry that my adolescence is showing and that the news world is merely feeding my worries in their conspiracy to topple their new whipping boy.... But of course I do not completely believe that. There is just too much division and tension for me to believe it is merely that. I see a flurry of executive orders that seem to divide and separate. My friend and colleague teaches a simple enduring understanding: "What you can separate you can violate." I know I am probably wrong in letting my fear lurk. I know I have faith in the law, and the glorious balance of power we have set up in America. I know that despite Orwell's line, “One does not establish a dictatorship in order to safeguard a revolution; one makes the revolution in order to establish the dictatorship,” we are not in a revolution, nor is our President a dictator. But I also know that the only way to make sure things work out well is to watch, be mindful, and continue to think for myself...

Next week... Something more focused and lighter. I promise!

Posted by Brother Pete at 11:41 AM No comments:

"Steampunk is nothing more than what happens when Goths discover brown" --Charles Stross:

This week's post shall be short as I am grading 1st semester exams while contentedly sipping coffee and enjoying the calm of a Sunday afternoon following a pleasant sleep-in...

I have no flow in mind for today's post, save an attempt to draw my readers' attention to a gem of American history, while allowing for a little biography at the same time. The history is Puck, and the biography is my love for the aesthetic found within a thing labeled steampunk. The two are not connected other than the latter draws in part from the look of the former. I have come to realize that my interest in the history of the late 1800s and early 1900s is in part formed by my like of the aesthetic of the time more than the events or politics of that era. I love glass and steel, and wood and rivets, and gears and cogs, and mechanical systems, oh boy!...

Puck is a humor/satire magazine that was in publication from 1871 to 1918; steampunk is a term that starts in my formative years, 1980s, as a sub-genre of cyberpunk, a science fiction world with the aesthetic of late 19th century, early 20th century styles of late industrialization.


Puck published cartoons from a time when illustrations often have a modern technical precision while looking antique at the same time. Steampunk seeks to embrace that time along with a "what if" way of looking at events of the past blended with alternative futures.

I love the work as it makes its way into Miyazaki's movies like Howl's Moving Castle, post-apocalyptic cinema like City of Lost Children, or graphic novels such as League of Extraordinary Gentlemen.

For my semester exam I challenged my students to analyze a political cartoon from Puck in 1883. I do not wish to analyze it some much as use it's interestingness to power haps draw my readers into doing a brief google search for puck illustrations and finding they way to looking at some delightful historical pieces. Enjoy! 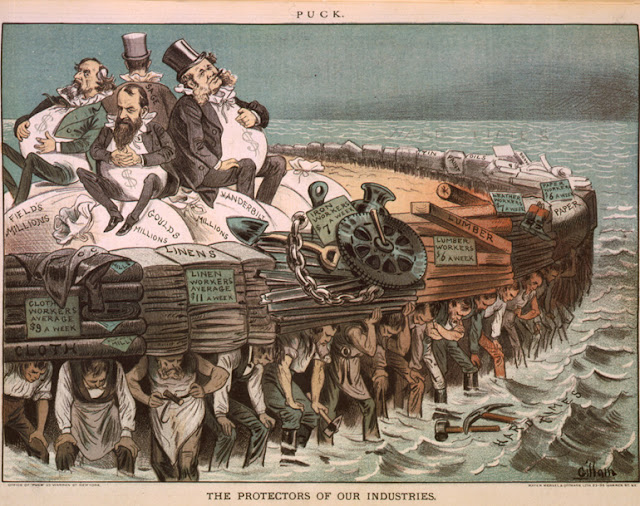 Posted by Brother Pete at 1:52 PM No comments: 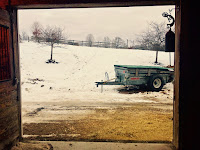 It was a bundle up your coat and pull down your hat, a see the wind press against your eyes; a feel hot breath under a scarf and fog up your spectacles kind of cold. You know that kind of crow call, hollow echo, clacking limbs, and silent stretches sort of morning where only upon lifting your head up from bracing against the chill do you catch the most magnificent pale rays filtering through the crispness... 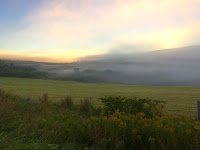 It was a sit by the window, cracked to the damp, splitter splash drip kind of morning. You know the white noise sort of fine wire brush dragged lightly and zenfully across a brass ridged cymbal sort of thing. Dogwoods and daffodils open, crocuses and redbud yielding their color to the day. Moist oxygen rich dirt releasing it's winter harvest of smells and life where blends of morning showers and afternoon sun transform the world into an eden for the senses...

It was a sit in the shade and listen to the distant laughter of children playing kind of laziness. You know that kind of low hum of a distant mower and the chirps of tree swallows intermingled with the light ticklish tussling of leaves in swaying branches. That mid summer malaise where you close you eyes against the heat and sun and watch the shadows of light and shade play about on the inside of your eyelids...

It was a pull on a sweater and pack up a sack, lace up some boots and put on a cap sort of hand holding, slow walking sort of afternoon. You know that open heart, warm soul, dry leaf, cool breeze, warm earth sort of shuffle where the darkness of fading sun is contrasted by the glorious release of color as the trees prepare for sleep. Long rays bathe horizontally as shadows play on opposite sides, and where hands hold and sweaters embrace there is only a deep contented sigh...
Posted by Brother Pete at 12:41 PM No comments: