The ruins out there might be full of riches...

2: "Some things in this world are better left where they lie. But if you know where to look, these ruins are full of riches"... (From the movie, 9)

As we pick through the past and live in moments filtered, we stumble across all sorts of demons and joys alike. Some things in this world are better left where they lie for sure. But when we open ourselves to an honest and compassionate search in the ruins of our pasts we may find a variety of items that when repurposed yield great new value to our lives...

Live in the past and "the now" is ruined; but sift through the ruins of the past to glean the best bits of scrap and the present becomes new and full of potential as creative repurposing and inspiration. But there are always those demons lurking in the ruins; there are always those things from our past that seek to break our spirits; we carry them forward if we are not kind to ourselves and leave them where they lie. They, these moments of the past, make us want to run and perhaps miss the gleaning...

We must choose not to run...

is what most human beings would like to do a good deal of the time. It is the flight part of the fight or flight deeply in our bodies and our past, it is our protection, an evolutionary momentum and a biological memory deep in the human body that allowed our ancestors to survive to another day and bequeath to us, generations later, this day. To want to run away is an essence of being human, it transforms any staying through the transfigurations of choice. To think about fleeing from circumstances, from a marriage, a relationship; from a work is part of the conversation itself and helps us understand the true distilled nature of our own reluctance. We are perhaps most fully incarnated as humans strangely, when part of us does not want to be here, or doesn’t know how to be here. Presence is only fully understood and realized through fully understanding our reluctance to show up.

To make a friend of the part of us that wants nothing to do with the difficulties of work, of relationship, of doing what is necessary, is to learn humility; to cultivate self-compassion and to sharpen a necessary sense of humor and a merciful approach to both self and other.

…We know intuitively that most of the time, we should not run, we should stay and look for a different way forward, … but we are wiser, more present, more mature, and more understanding when we realize we can never flee from the need to run away.  --David Whyte

Posted by Brother Pete at 6:21 PM No comments:

It all started with Warsaw for me back in 1987: So this week's post is is a nod to my day. If you have 17 minutes and 31 seconds, press play below. The band featured is New Order, a band that changed its name on a pact that should any member leave, they would change their identity. Singer Ian Curtis, of Joy Division killed himself when he was 23, sadly launching the already popular band into mythical status, and creating a desire by the remaining band members to transition away from his signature sound. A punk-influenced band reacting to the Sex Pistols and pioneering the way into the post-punk world, Joy Division was a major influence on me when I was in middle and high school (and Still). I have been listening to Joy Division for the last few hours now, and decided to move on to New order, a more electronic and dance oriented band. They did an instrumental that is an elegy for Ian.  It was the soundtrack for my favorite stop animation film, More, by Marc Osborne, and was used in season one of Stranger Things. It has been favorite of mine since I first heard it last century. This is that song:

Posted by Brother Pete at 10:28 PM No comments:

Is the basic teaching of Buddhism—on ignorance, deliverance and enlightenment—really life-denying, or is it rather the same kind of life-affirming liberation that we find in the Good News of Redemption, the Gift of the Spirit, and the New Creation?


― Thomas Merton, Zen and the Birds of Appetite 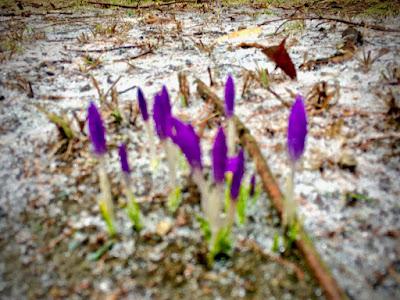 March: As seen on the interwebs:"in like a lion, out like a bastard" ... road flares and rescue trucks, three accidents seen in white-out sleet and slushy piles... salt caked undercarriage and broken leaf springs freed to crush shocks but thankfulness for no malfunction in arriving safely into April...

April: Spring snows melt... can we be done with the bastard? (or is winter coming?) -- Red Sox on my mind, dogwoods getting ready to do their thing down the coast (and the red buds and the daffodils and the tulips and the cherries and the crocuses... oh my!) -- special days and shorter nights -- mud season yes, and wild fires too... all taken care of by the budding of green, life anew...